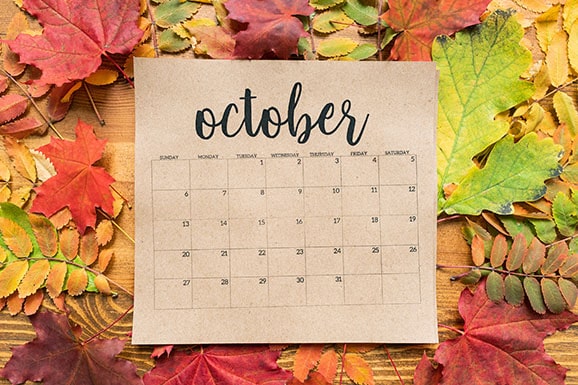 THE MAGICAL WORLD OF NUMBERS

By October, the beautiful season of Fall has arrived bringing with it new looks in Mother Nature, new weather conditions and new life styles for we humans as we begin our nesting for the next several months.

This tenth month of the calendar year has all the energies of a compound Number. Not only does Ten carry the qualities of One but the Zero “super charges” One which adds intensity. Metaphorically, the Zero is like a Delco battery sitting on a store shelf full of force and power. It is not until the battery is connected to the motor in a car, for example or some mechanical device, that it really literally gets its “motor going”!

The ancients believed that the Zero symbolized eternity, wholeness, oneness equaling the power of God. To these believers, this glyph was the Alpha and Omega concept as represented in the geometric of a circle.

Happily, the Number Ten is a good Karma Number not a nasty Karmic Debt Number which usually leads to personal and financial losses in a lifetime. The Number Ten is not about a debt still to be paid and rectified but an energy to be enjoyed as a consequence of good behaviors and choices made in this incarnation and previous human lives. There is a freedom connected to this Number that says “your debt has been paid and now you may begin again”.

Basically, Number One represents the energy of drive and focus. This intellectual and masculine energy represents “no nonsense” leadership. Ambition and determination are the buzz words. Being a “bossy boss” is a danger here. Those born on the tenth of month are not only predestined to lead but their attainment of material goods in this lifetime is assured.

Keeping these qualities in mind, the Number Ten is represented by the Wheel of Good Fortune in ancient Tarot decks. The Number Ten is a good Karma Number that many think of as winning the lottery, receiving lucky breaks or even financial advancements in the stock market. One, however, has to keep in mind that money is simply an energy boomeranging back to us for our past efforts to move forward in life

As a personality and temperament, Number Ten people are in perpetual motion both – multi-faceted and multi-talented. It is not unusual for them to promote several businesses at one time. . A gift for invention and creativity is prevalent. This shows the influence of the God Force connection to Spirit, the Zero, where all creativity originates. The best money can be made in fields that are new, different and original. A desire for self-employment may be prevalent.

The Number Ten personality resists taking advice from others, tending to believe that their judgment is paramount and that they should be the giver of wisdom instead of the taker. Because

of Ten’s fierce independence and self-starting qualities, Number Tens appear not to need help from others and therefore do not receive it. They appear to be the tower of strength that others can rely on.

Focus on having a personal vision for yourself in October. See how everything connects in your life making you more aware. Listen to the God Force within you to uncover new patterns and establish new cycles of good fortune. Think “out of the box” and expand your horizons for this good Karma vibration showering over all of us in October clearly has the energy potential to show us the great and glorious abundance of the Universe.

For a private Numerology reading with Elizabeth Summers, please go here to review your choices: https://elizabethsummers.com/product-category/numerology-readings/